The Awakening of Leeowyn Blake by Mary Parker 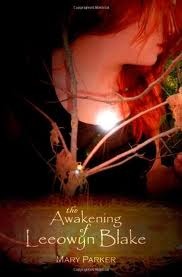 
I'm a normal teenager. I have a normal teenage life with normal teenage problems. The summer is my heaven. I live with my mom during the summer months. We stay in her tiny condo in Jacksonville, Florida. My parents split up when I was little. I'm not sure why. My mom never talks about it. Whatever it was, it was bad enough to make my mom pack me up in the middle of the night when I was four years old and run to my Gran's condo. My mom got the condo after Gran died. From that time on all I had known my entire life was beach life. Until four years ago. Until my uncle found me.

Before I start with my review for this book I just wanted to say that this blurb could be used as an example of how you do them. I knew that something paranormal was behind all this but I had no clue what's it about until it got revealed in the book. So I got to say that this book took my by surprise.

Now I wish I could say that everything else about this book was as good but sadly I cannot. We start with Leeowyn here, as our main character. She is a teenage girl whose life was suddenly changed when her uncle appears. This story is told in fragments at the start so we get thrown back in the past from time to time to see what happened to her and to get the full picture. It wasn't badly done, but the deal with me is that Lee and I didn't connect and she tended to annoy me a lot. She was one of those whiny girls, and I wish it was much sooner that she got her back into her senses and started to behave like it was expected from her. Sadly this way I assume that we can expect that from her in the sequel.

That being sad I feel like this one has created a really nice foundation for the future books and I truly hope that the next ones will be nicely character and world built which would make me go back to this series.

But despite that just the fact that I had no idea what was going on through the most of the book kept me turning the pages and at the end I have read this one faster than expected.

*Note: Copy of this book was kindly provided by the publisher, WordCraft Press. Thank you!
Objavio/la Tanja - Tanychy u 00:00