Hello all! Today I have a special treat for you. This is a cover reveal for the Tone Deaf by Olivia Rivers. Without further ado... 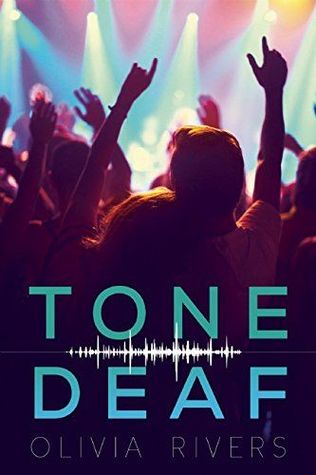 
For child prodigy Ali Collins, music was life. All that changes when a brain tumor lands her in a silent nightmare, controlled by her physically abusive father and the deafness she’ll never get used to. When Ali accidentally wins a backstage tour with the chart-topping band Tone Deaf, she reluctantly accepts the prize, only to be kicked out. Jace Beckett, the lead singer of the pop-punk band, refuses to even speak to Ali because she is deaf.Ali threatens to report Jace’s discrimination, but ends up agreeing to keep quiet in exchange for money. With a bit of cash, she can escape to New York and get away from her father. Then Jace notices her fresh bruises and changes the offer, claiming he’ll use his influence and connections to help Ali escape. But even when Jace reveals a baffling fluency in American Sign Language, she can’t bring herself to trust him.When Ali’s dad crosses a new line, she’s driven to accept Jace’s offer despite her fears. Soon she’s traveling cross-country, hidden away in Jace’s RV as the band finishes their nation-wide tour. As weeks pass, the members of Tone Deaf start to resemble a quirky little family. Then there's Jace. Ali can't figure out his mood swings, but she knows she’s falling for the passionate and secretive musician. Jace’s hardened attitude melts away more with every mile they travel, and Ali finds herself ever closer to understanding his attitude towards the deaf. But when tragedy strikes, Ali must decide between walking away from Tone Deaf, or sacrificing her freedom to save Jace and his band.

Olivia Rivers is a hybrid author of Young Adult fiction. Her works include the independently published “Tortured Elements” and “Duplicity” series, along with the traditionally published novel “Tone Deaf” (Skyhorse 2016.) As a certified geek, she enjoys experimenting with new publishing technologies, and her online serials have received over 1,000,000 hits on Wattpad.com. When Olivia isn’t working as a writer, she’s a typical teen attending college in Northern California. Olivia is represented by Laurie McLean of Fuse Literary, and nothing thrills her more than hearing from readers.