Sometimes, one must accomplish the impossible.
Beneath the mountain, the king’s reign of tyranny is absolute; the one troll with the capacity to challenge him is imprisoned for treason. Cécile has escaped the darkness of Trollus, but she learns all too quickly that she is not beyond the reach of the king’s power. Or his manipulation.
Recovered from her injuries, she now lives with her mother in Trianon and graces the opera stage every night. But by day she searches for the witch who has eluded the trolls for five hundred years. Whether she succeeds or fails, the costs to those she cares about will be high.
To find Anushka, she must delve into magic that is both dark and deadly. But the witch is a clever creature. And Cécile might not just be the hunter. She might also be the hunted…

One of the things you maybe don't know about me is that I'm a list person, meaning I make lists, often. It doesn't matter if it's reading related or not I tend to have some lists in my head. Therefore here is one little short list of things this book made me do:

Now after reading this book I'm in the same position I was a year ago after finishing Stolen Songbird. Even though this book was quite long I wanted more. I still do and I really cannot wait to get back into this world one last time. That's gonna be hard. But till then you should totally read The Maledict Trilogy.

*NOTE: Review of this book was kindly provided by the publisher, Angry Robots. Thank you so much. All opinions are personal!
Objavio/la Tanja - Tanychy u 00:00 Broj komentara: 8: 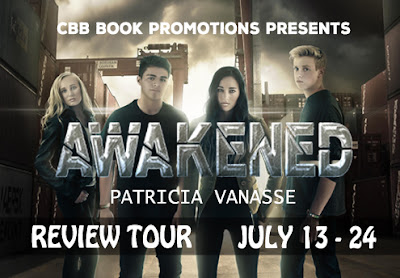 Welcome to my tour stop for Awakened by Patricia Vanasse!  The tour runs July 13-24 with reviews only. This is the second book in the series. Stop by the tour page for more information. 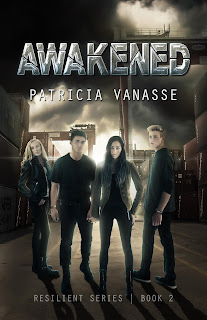 
In an attempt to protect their families, Livia and Adam set out in a search for answers that would change their lives forever. While on the run, Livia and Adam crossed paths with Daniel, who had been searching for them and the five other genetically enhanced teens Daniel knew existed. But getting out from under The Agency’s radar has not been easy. After being ambushed by the leader of The Agency that created them—a desperate attempt to claim what they lost just over a decade earlier—Livia was forced to leave an injured Adam behind, barely escaping to safety with Daniel. Now under the control of The Agency, Adam is serving the purpose for which he was created. Manipulated to forget his love for Livia and his past, he lives a life crafted by fake memories that enslave him to a life of following the orders of The Agency. Adam battles with vivid “dreams” of a life he does not remember and the strong connection he feels to the girl with familiar blue eyes.The desire for vengeance propels Livia and Daniel into a dangerous race to disrupt the destructive string of events that The Agency initiated seventeen years earlier. As they travel across parts of North America in search of other teens who are just like them, Livia will face an ethical battle over genetics, loyalty, and love. The race is on, and it is up to Livia to destroy The Agency and rescue Adam, but even if she succeeds at saving him, there are no guarantees she’ll able to save the deep connection they once shared.

Buy the book at  Amazon

Even though it's been over a year since I had a chance to read and review the first book in this series, Resilent I'm happy to say that it seemed like no time has passed at all. I was able to jump into the story right away and follow Adam and Livia's journey.

Where Resilent was stronger on humor and a bit lighter, Awekened was all but that. Here guys have serious problems to deal with and with that The Agency is closer than ever and stronger than ever. Therefore, this book is also much quicker in pace, as it's constantly on edge. Their run is fast and what's more we get to see the story from different perspectives, or better said characters so we see what's happening on both sides. With that Adam and Livia are now apart, and because of that their love functions differently.

But this sequel isn't without issues. While Adam and Livia now get a chance to think about their emotions I missed seeing them together. In the first book those moments were nicely balanced with the action so it was much easier to follow it. The other thing that I had some troubles with were hints of a love triangle. No, there isn't one yet here, but I am afraid it might come to that.

Still I hope not, and I will continue to hope till the next sequel.

Rating: 3 stars.
About the Author:

Patricia Vanasse was born and raised in Rio de Janeiro, Brazil. Now she lives on a beautiful island in the Pacific Northwest. She has been through Culinary Arts, Psychology, Law School, and now has finally found her passion in creative writing. She also loves traveling, cooking, and is an avid reader. Her strength- believes that everything is possible. Her weakness- an obsessive relationship with caffeine.