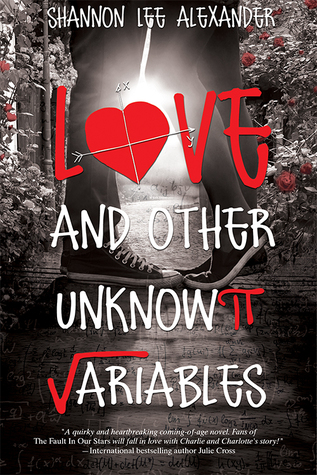 
Charlie Hanson has a clear vision of his future. A senior at Brighton School of Mathematics and Science, he knows he’ll graduate, go to MIT, and inevitably discover solutions to the universe’s greatest unanswered questions. He’s that smart. But Charlie’s future blurs the moment he reaches out to touch the tattoo on a beautiful girl’s neck.

The future has never seemed very kind to Charlotte Finch, so she’s counting on the present. She’s not impressed by the strange boy at the donut shop—until she learns he’s a student at Brighton where her sister has just taken a job as the English teacher. With her encouragement, Charlie orchestrates the most effective prank campaign in Brighton history. But, in doing so, he puts his own future in jeopardy.

By the time he learns she's ill—and that the pranks were a way to distract Ms. Finch from Charlotte’s illness—Charlotte’s gravitational pull is too great to overcome. Soon he must choose between the familiar formulas he’s always relied on or the girl he’s falling for (at far more than 32 feet per second squared).

Warning: I feel like it's my duty to warn you that you'll see this book connected and compared to the other cancer book we all have heard of. While the reasons for that are there and the comparison is justified in my opinion, I also want to say that this is not just another TFIOS wannabe, and it's much much more than that.

Meet Charlie or I would like to call him one of the sweetest and cutest male character I have ever seen. By those adjectives I don't refer to his looks, but to his character. He is maybe your typical high school nerd, who loves everything science related and somehow believes that it's the only thing he will dedicate his life to (but lets face it we all though that when we discovered things that we were good at). But soon enough someone will show him that life is much more than that and that there are things that he is yet to discover. And all also that you don't necessarily have to be good at something to do it. What counts are lessons that you learn in the process and Charlie learned a lot.
Also heck to the author who did an amazing job with writing this book in male POV and boy, did she deliver.

Then there is Charlotte, a girl you will grow to love and her wit and quirky sense of humor will make you laugh out loud. She is a fighter, a girl that while experiencing a great deal of injustice from the universe still fights and decides that maybe she can't win the war, but there are always battles to be won.

So instead of saying more I'll just make a list. List of things this book made me do:
Finally, I think I want to recommend this book to people who didn't like TFIOS and think that they won't like any other cancer book (I can think of few) as Charlie and his story might surprise you.

*Note: Copy of this book was kindly provided by the publisher, Entangled Teen, via NetGalley. Thank you!
Objavio/la Tanja - Tanychy u 00:00