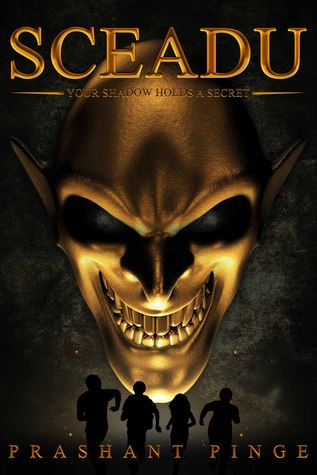 All this while, Matilda’s shadow had been growing larger and larger. Suddenly, it lunged out of the ground and swallowed her, like a python does its unsuspecting prey.


Nine year old Matilda ends up with a century old book through a series of strange coincidences. And disappears. Her brother and cousins are forced to suspend their hostilities and pursue her to Sceadu, a land inside the human shadow. Once there, the reluctant visitors find themselves chased by the vicious Hefigans, creatures of Sceadu. However, everything changes with the revelation of an ancient prophecy that foretells the doom of the world they left behind.
With the stakes suddenly raised, the children must now navigate the dangerous terrain, overcome grave challenges, and unlock the secrets of the shadow. But can they do it in time to thwart the plans of the treacherous Hefigans? Or will they succumb to the guile of a ruthless enemy who is equally determined to destroy mankind?
Sceadu is a fast-paced adventure which blurs the boundary between the physical and the psychological, the real and the mythical.

I will first tell you something about this book I didn't know before I started reading it. This book is actually MG story. So I just wanted to let you know. It's not a bad thing, though, as I haven't read any for some time and well it was nice to go back to it.

As you usually have it in MG stories, this is an adventure story. And I can tell you it's a really interesting one. We are with Matilda here. She is a girl that loves to read (high fives girl) and one day she gets to read an interesting book, which changes her life (don't they all). Suddenly, her shadow is not just that a shadow but it get a more powerful meaning in this story. It all stays in realms of dreams, for some time but well not all things can stay hidden. The worst thing for her is that she is not alone now, when her cousins visit this is not only about Matilda, but she drags them into all this, without intending to.

But as it happens in MG books, this book was predictable to some extend and full of coincidence. It's not that I don't think it's bad, but I could see through it. I'm sure that younger readers will consider more like a big plot twists, than I did.

But all in all, I must that that it was an interesting read and with all that a really fast one.

*Copy of this book was provided by the author, Prashant Pinge. Thank you!
Objavio/la Tanja - Tanychy u 00:00