Finnikin of the Rock by Melina Marchetta 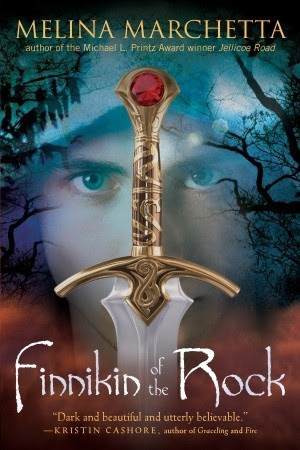 
Finnikin was only a child during the five days of the unspeakable, when the royal family of Lumatere were brutally murdered, and an imposter seized the throne. Now a curse binds all who remain inside Lumatere’s walls, and those who escaped roam the surrounding lands as exiles, persecuted and despairing, dying by the thousands in fever camps. In a narrative crackling with the tension of an imminent storm, Finnikin, now on the cusp of manhood, is compelled to join forces with an arrogant and enigmatic young novice named Evanjalin, who claims that her dark dreams will lead the exiles to a surviving royal child and a way to pierce the cursed barrier and regain the land of Lumatere. But Evanjalin’s unpredictable behavior suggests that she is not what she seems — and the startling truth will test Finnikin’s faith not only in her, but in all he knows to be true about himself and his destiny.

Tanja: We have decided to do this review together. Even though, Glass said that she had no idea how to do this review and I couldn't agree more. I say we just start and go with the flow.
First of all, I need to point out that I hardly believe Melina Marchetta can write a bad book.
Glass: There is no way you can put Melina Marchetta and bad book in the same sentence. That woman is brilliant. I thought that I couldn't love her more after her realistic novels and, shame on me, I did have doubts about her fantasy series - how delusional I was. Pft..
Tanja: I was afraid for another reason. I mean Melina is, by far, my favorite author and I really love fantasy, so I thought I had high expectations. Well, you can get them as high as you want and you won't end up disappointed here. So shall we say something about Finnikin? I mean he is already in our harem and he is going to stay there.
Glass: He is disgusting creature, girls. You do not want to meet him. (Keep it quiet, Tanja! Do you want them to steal him from us?! We barely managed to agree about sharing him between us!)
Tanja: (Oh, I'm an idiot!) I mean he is awful. How could he act like that?
Glass: He walks across whole kingdom following this weird girl who have strange dreams, he saves her sorry ass no matter how many times she makes him mad or annoys him, he is loyal and brave, and he holds her hand whenever she needs him. Yes, why would you want him? Run while you still can.
Tanja: Yes and then he is such a sweetheart cause he doesn't want to be in power as his best childhood friend was supposed to be that. I can't count how many times I wanted to hug him. But not just him, I could totally relate with Evanjalin, too. I understand her actions and supported them. Same is for Froi. I will hardly forget that scene from the book (you know which one) but now while reading the second book I can't help but cheer for him. Like you said that Melina always makes her characters somewhere in the middle. Non of them is perfect nor flawless, but for me that makes them more real and easier to love.
Glass: Oh, Froi. Well, considering that we are reading second novel in the series, I am little bit  moon-eyed when it comes to Froi, but I have to admit that I had my doubts about him in the first half of the book. Oh, the scene! And don't forget about her female characters - they are not weak girls, they do not need someone to take care of them constantly because if there are no men in their life, they could lay down and die, there is no hope. Evanjalin is one of my favorites characters in this book, well in any book I've read so far. And don't let me start fangirling about Beatrice.
Tanja: I was skeptical, because of that scene. But then again we all make mistakes and luckily Froi is fixing everything with his actions now. Of course, remember the scene when Evanjalin started to kick some guys. I was cheering for her aloud (luckily I was home alone). Yes Beatrice too. I'm still to find out what really happened, but I admire her and the way she walks with her head raised no matter what happened! It's a perfect combination here as you have great characters and an amazing story. Another thing I really like is the way the story goes. I love it that we first meet characters out of their comfort zone. Because we first meet all the people in exile and Finn too and then we got to see Lumatere, as the picture of new beginnings.
Okay, I was thinking we could share some quotes for the end?
Glass:  Do I have to? I want to quote whole book. Let me try...

Never underestimate the value of knowing another's language. It can be far more powerful than swords and arrows.

Tanja: I know honey, I'd too. I love that one and we can totally relate to it. Here is mine:

Then I choose to drown, Finnikin said. In hope. Rather than float into nothing.

Because I'd choose that too.

We, Glass and Tanja, full-heartedly agree that this book is a must read.

Rating: 5 stars is not enough, infinite is a right term.