Maya Price is a typical eighteen-year-old girl without much going on in her life. Her biggest problems include getting ready to leave her hometown for college, figuring out how to avoid her ever-so-strange stepmother, and trying to muddle through her feelings for her best friend, Pete. Yet, on one of her last nights in her hometown, she and Pete are in a car accident. A stranger pulls Maya from the accident, leaving Pete behind, and takes her out of this world and into another dimension.

Maya soon discovers that she has been taken to a dimension called Leets by a group of people that call themselves shifters. Shifters are of mixed human and onyx blood and have various abilities.  These shifters are able to travel between dimensions and control the four elements (fire, earth, wind, water) and the five senses (sight, sound, smell, touch and taste). Their leader, Victoria, informs Maya that she, too, is a shifter and that she must choose to join them or risk being sought out by their greatest enemy, a shifter named Leonas.

Maya joins Victoria and her ragtag group of rebel shifters in Leets, where she is teamed up with a group of seven other shifters. Her new "teammates" include a street-smart girl named Luz, who is especially adept at controlling fire, her twin sister Espy, and a nervous boy named Lamar, who can manipulate sound better than any other shifter. Together, Maya’s team trains for the battle that will soon be  inevitable.

However, Maya soon learns that her purpose is not to just move the earth or send water flying into the air. There are rumors of a hidden prophecy and that the prophecy mentions Maya by name. Supposedly, the prophecy says that Maya will one day have to choose a side and will be essential in bringing her chosen ally to power...

How did this book manage to surprise me on so many levels reminds a mystery. Yes, I've read the blurb before reading the book (yes, I do that when it comes to the blog tours) but still I guess I wasn't expecting non of this.

What started as some sort of contemporary story about a girl, named Maya turned into something totally unexpected. I managed to get into new world, or better said another dimension. Like I said we start with Maya Price a normal girl who likes running and she turns into such a great leading character, where we connected right away it was only a matter or hours that will take me to read this story. She is a eighteen-year-old girl that looks forward to the future and hoping to spend as much time as can with her best friend Pete stops at the night of the car accident in which the two of them are involved. Soon enough Maya gets transported to another dimension where the picture of her life collapses and she manages to meet the new world and new self. With the prophecy that states another truth about her, Maya has a lot to learn. Not only is Maya a great character but with the whole spectra of characters you start to turn the pages rapidly just to see what happens next.

Maybe at the start the writing will be a bit unusual as it's starts with first person narrative and the switches to the third, soon it becomes irrelevant as you connect the dots. The same thing is with the story line. At some points the story gets interrupted with another characters, and in general with something that at first you won't be able to understand, as it goes you catch the answers on all your 'why's and 'how's. 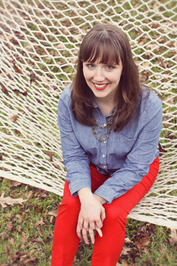 Faith A. Rice-Mills is the author of Identified: The Maya Price Story and a handful of short stories.  She moonlights as a Spanish teacher,  but has wanted to be a writer since she wrote the poem “The Jackowhipp’s Wail” as an eight-year-old.  Her writer’s spirit resides somewhere between Narnia and Mount Doom, but her physical body lives in Texas with her family.  Besides writing, she loves reading (and will take recommendations!), yoga, coloring with her daughter, and watching Parks and Recreation with her husband.  She dislikes snakes, the word “literally,” and teaching double object pronouns in Spanish.  She is currently working on Burdened, the second book in The Maya Price Story series and is writing whatever short story she has to get out of her brain.
Author's
Website / Twitter / Goodreads