Veil of the Corrupter (Ardentia #2) by J.L. Tomlinson 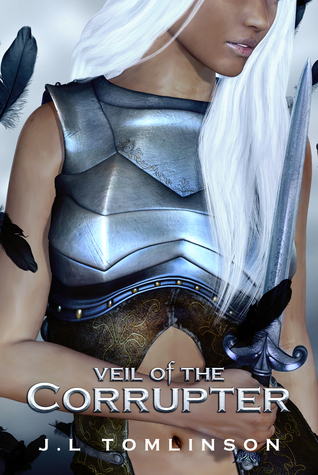 
King Myole is dead. His Light now awaits the heir who will make Ardentia whole once more. The Pinnacle approaches.
The Narcean half-breed Jahna Mornglow must farewell the west and the life she has known to reveal the secrets of The Empyrean Key. Having to supervise unruly Lilac and prudent Silko was enough of an added chore, but now the companions are joined by Arn, the Maddroff thief whose charm and guile both frustrate and entice her.
In Castle Dubraycon, sinister shadows shift with dark purpose as Selizardra grooms the reluctant Princess Mydra for the coveted throne. The Vessels, led by the elementalist Menon, sense the malice seeping through Kalavar and stand ready to be unleashed upon Ardentia's foes; while the Seer Friziel can only observe as the threads of his deceptions begin to unravel.
Ardentia is vulnerable, with hidden enemies just as dangerous as the Rew'tuur horde that test the defences of the barricade. But soon the veil will be lifted.
Old gods will awaken; dark powers will rise; and the arrival of a mysterious warrior will tip the scales, but in whose favour?

When I got a chance to read The Empyrean Key few months ago I had no idea that I would be so curious about it and honestly I couldn't wait for the sequel to come out. Now I guess I'm again in the same position as I need to know what happens next.

Best thing is that Veil of the Corrupter continues where The Empyrean Key ended, we're back in Ardentia and we continue to follow Jahna and her friends. While they are on their quest some things change in this book. Beside Silko and Liliac who I though were great side characters here we get to meet a couple more. Therefore I believe that Sky was a great addition to the story and I enjoyed having new dimension added to it. Other thing that made me happy is that we still continued to follow both plotlines, Jahna's quest and happenings in the court, which gave a full perspective to the story. Not to mention that I still ship Jahna and Arn a lot and I love how innocent and slow-building their romance is. Hopefully I'll get to see more of it soon.

But sadly I cannot say that this story is flawless, some of them I knew would occur, like predictability which is something I encounter in almost every MG book (even though I'm not sure we can classify this one as solely MG book). The other problem for me was that some of parts of this sequel were rather slow and somehow they killed the mood a bit. Their adventure is what captivated me from the start and it continued to do so, but it had its ups and downs in this book.

What I said for the first book in this series can be said for this one too, I'm sure that younger readers will enjoy this one much more as it's all young mind could ask for. But we can say that my young mind enjoyed this too and that I cannot wait to see how this series continue to develop.