Welcome to my tour stop for the historical suspense novel Silk by Chris Karlsen. This is an adult book and is rated NC17. This is a review tour runs March 16-27th. Check out the tour page for more information and the tour schedule. 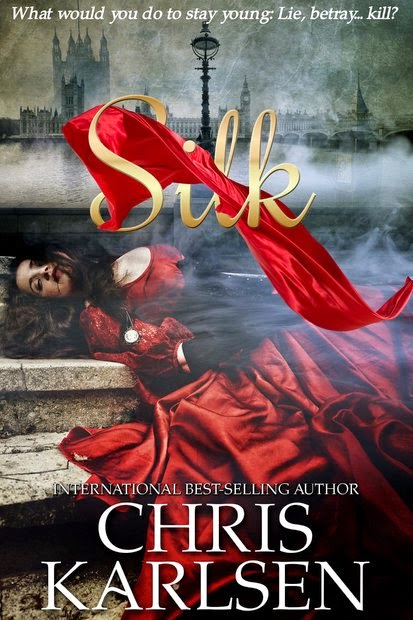 Silk on the skin—luxurious, luscious..lethal.
London-Fall, 1888
The city is in a panic as Jack the Ripper continues his murderous spree. While the Whitechapel police struggle to find him, Detective Inspector Rudyard Bloodstone and his partner are working feverishly to find their own serial killer. The British Museum's beautiful gardens have become a killing ground for young women strangled as they stroll through.
Their investigation has them brushing up against Viscount Everhard, a powerful member of the House of Lords, and a friend to Queen Victoria. When the circumstantial evidence points to him as a suspect, Rudyard must deal with the political blowback, and knows if they are going to go after the viscount, they'd better be right and have proof.
As the body count grows and the public clamor for the detectives to do more, inter-department rivalries complicate the already difficult case.
What would you do to stay young: Lie, Manipulate..kill?


Events of the day and the potential satisfaction of giving Napier a bloody nose dwindled. Questions about the murder crept back into Ruddy's thoughts. Morris joined him at his table in the rear of the pub with a Guinness, the popular beer of choice in hand. “You’ve got the look of a man whose thoughts are a long distance from London.”
“No, sadly my thoughts are fixed here in the city. I’m trying to figure out a clue. Ellis’s roommate said she’d sometimes meet with a well-dressed man, a man of means the victim indicated. They’d meet up at the fountain by the British Museum.”
“Don’t know the spot but then the museum isn’t my cup of tea.”
“Not the point. I’m saying it’s odd. What member of the upper class chooses to stroll through a public garden other than Hyde or Regents, where they can see and be seen by one of their own?”
“I agree the wealthy prefer the parks filled with others of their kind but it doesn’t mean a man can’t enjoy someplace different.”
“We interviewed the guard again. The one that discovered the body walks that half of the building. He told us the majority of their male patrons are natty dressers, but he never saw a man like that loitering by the fountain.”
“My guess is: the man is married and can’t afford to run the risk of being seen by a friend of his wife’s. Or, he might live or work in the area and the spot is convenient.”
“Or, he’s a murderer who’s noticed the victim walking through the park on a regular basis, saw it as an opportunity and cozied up to her.”
Ruddy took another swallow of his ale, mentally debating the merit of each theory. “I don’t think he lives in the area. If so, he’d have cut through the park more and been seen by the guards. Not sure about the married man having a tryst idea."
To Ruddy's way of thinking, if the man was married and looking for a tumble, he’d have met her someplace other than the gardens and at a better hour.
Instinct drew him back to his original sense of the culprit and crime. “I feel like this was a crime of opportunity. I’ve thought it all along and can’t shake the sense.”
“If he was just seeking a victim, then why haven’t you had more murders like this?” Morris asked.
Ruddy downed the rest of his beer and put his tankard on the edge of the table where June would refill it. “Everyone has to start somewhere. She might be number one.”

Book trailer
About the Author: 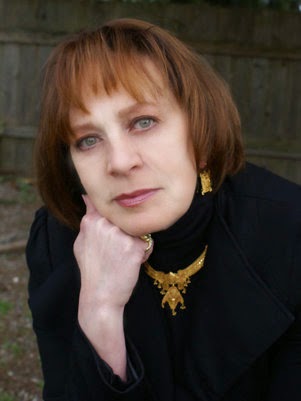 I was born and raised in Chicago. My father was a history professor and my mother was, and is, a voracious reader. I grew up with a love of history and books.
My parents also love traveling, a passion they passed onto me. I wanted to see the places I read about, see the land and monuments from the time periods that fascinated me. I’ve had the good fortune to travel extensively throughout Europe, the Near East, and North Africa.
I am a retired police detective. I spent twenty-five years in law enforcement with two different agencies. My desire to write came in my early teens. After I retired, I decided to pursue that dream. I write two different series. My paranormal romance series is called, Knights in Time. My romantic thriller series is, Dangerous Waters.
I currently live in the Pacific Northwest with my husband, four rescue dogs and a rescue horse.