We are dying to share this Release Blitz with you all to celebrate K.A. Tucker's BECOMING RAIN! BECOMING RAIN is a New Adult Romantic Suspense novel, and the second novel in K.A. Tucker’s Burying Water Series, published by Atria books, an Imprint of Simon & Schuster. We hope you're ready for this!

Luke Boone doesn't know exactly what his uncle Rust is involved in but he wants in on it-the cars, the money, the women. And it looks like he's finally getting his wish. When Rust hands him the managerial keys to the garage, they come with a second set-one that opens up the door to tons of cash and opportunity. Though it's not exactly legal, Luke's never been one to worry about that sort of thing. Especially when it puts him behind the wheel of a Porsche 911 and onto the radar of gorgeous socialite named Rain. Clara Bertelli is at the top of her game-at only twenty-six years old, she's one of the most successful undercover officers in the Washington D.C. major crime unit, and she's just been handed a case that could catapult her career and expose one of the west coast's most notorious car theft rings. But, in order to do it, she'll need to go deep undercover as Rain Martines. Her target? The twenty-four-year old nephew of a key player who appears ready to follow in his uncle's footsteps. As Clara drifts deeper into the luxurious lifestyle of Rain, and further into the arms of her very attractive and charming target, the lines between right and wrong start to blur, making her wonder if she'll be able to leave it all behind. Or if she'll even want to.

And don’t forget BURYING WATER, the first book in this thrilling series…

About BURYING WATER:
The top-selling, beloved indie author of Ten Tiny Breaths returns with a new romance about a young woman who loses her memory—and the man who knows that the only way to protect her is to stay away. Left for dead in the fields of rural Oregon, a young woman defies all odds and survives—but she awakens with no idea who she is, or what happened to her. Refusing to answer to “Jane Doe” for another day, the woman renames herself “Water” for the tiny, hidden marking on her body—the only clue to her past. Taken in by old Ginny Fitzgerald, a crotchety but kind lady living on a nearby horse farm, Water slowly begins building a new life. But as she attempts to piece together the fleeting slivers of her memory, more questions emerge: Who is the next-door neighbor, quietly toiling under the hood of his Barracuda? Why won’t Ginny let him step foot on her property? And why does Water feel she recognizes him? Twenty-four-year-old Jesse Welles doesn’t know how long it will be before Water gets her memory back. For her sake, Jesse hopes the answer is never. He knows that she’ll stay so much safer—and happier—that way. And that’s why, as hard as it is, he needs to keep his distance. Because getting too close could flood her with realities better left buried. The trouble is, water always seems to find its way to the surface. 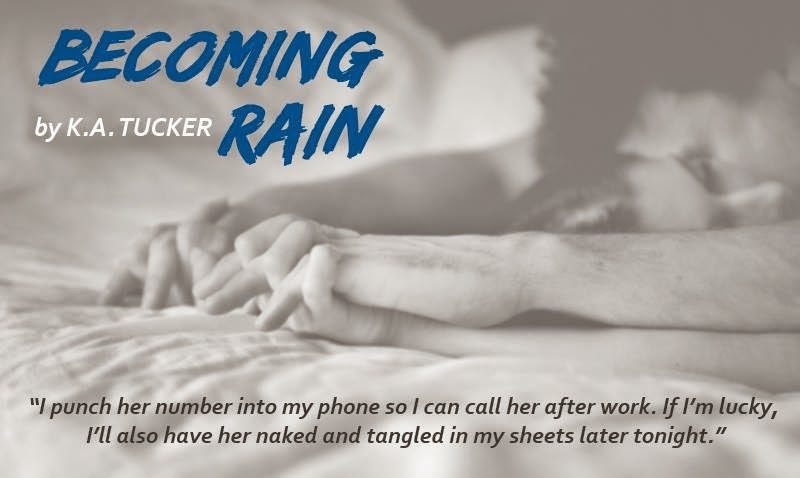 Screwing the customers . . .” Miller grumbles, pushing the filing cabinet shut with a loud metal bang.
Only the pretty ones.” And she is that. It wasn’t until she lifted her sunglasses that she had my undivided attention. Those big, blue eyes up against an olive complexion are striking. I wouldn’t have guessed Italian. Mediterranean, definitely.
Exotic, dark-haired, killer body—my type exactly.
“You’re going to lose business for the garage.”
“Relax. I wasn’t the one fishing.” And there was definite fishing on her part. For a long while there, I wasn’t sure I wanted to take the bait. Everything about her—her upscale style, her expensive car, her cool demeanor—says she’s my kind of girl, and therein lies the problem. My kind of girl is good for one thing, and it’s not having lunch over at the food carts of Portland. Or conversation, in general.
Give those kinds of girls more and suddenly they become work, and money. Endless streams on both accounts. Rust warned me about them years ago. Thank God I haven’t tumbled into any of their traps. Even Priscilla, my fallback lay, who I consider a friend, knows exactly where we stand in terms of our “relationship” and that I don’t have the kind of money she wants—even she will occasionally try her hand at sucking more out of me. A new bracelet, cash for rent, a tank of gas for the BMW that her last sugar daddy handed her . . .
But Rain was cute today, in a feisty way, humoring me by taking a bite of that sandwich that she was so obviously not going to enjoy. Her nose crinkling up at the sight of it. Her witty little insult. The way she hung back, waiting, hoping for a chance to see me again but not willing to come right out and ask after already being so forward earlier. Girls like Priscilla would have kept pushing. But Rain obviously has some self-respect.
And when she started walking out of the office, I couldn’t help myself.
I punch her number into my phone so I can call her after work. If I’m lucky, I’ll also have her naked and tangled in my sheets later tonight.

Born in small-town Ontario, Kathleen published her first book at the age of six with the help of her elementary school librarian and a box of crayons. She is a voracious reader and the farthest thing from a genre-snob, loving everything from High Fantasy to Chick Lit. Kathleen currently resides in a quaint small town outside of Toronto with her husband, two beautiful girls, and an exhausting brood of four-legged creatures.


a Rafflecopter giveaway
Objavio/la Glass u 06:00