(Bookish Problems #1) Sequels I Am Afraid to Read 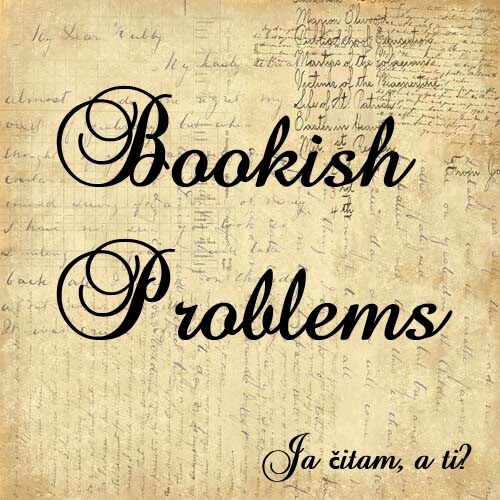 We all have our problems. Some people are afraid of the dark or spiders. Kids hate this time of the year because all the tests they have to take. Others hate the rain and cold weather, my(Glass) grandfather hates it because he can't slip out of the house and away from my obsessive grandmother with excuse of working in the garden. Wife doesn't like her husbands new haircut, and husband thinks that new couch his wife had picked is ugly

We? Well, we are afraid to read sequels of my favorite series. Most of those are final books. It is obvious that we are sad because few of series have come to an end, but also we read too many bad reviews. We don't wan't to be disappointed.

Both Tanja and I are big fans of Veronica Roth, we loved first two books of her dystopian series. I think that Tanja even rated them higher than me.

Why do I have problem with Allegiant? I tried really hard to stay away from status updates and reviews and all the spoilers on Goodreads, but I couldn't escape the fact that most of the people are not happy with how everything ended. Is it same thing like with final book of Hunger Games? (That one was my favorite in the series.) Or is it just that bad? I remember that I had some issues with previous book, Insurgent. Tanja and I should buddy read Allegiant next month, so we will see.

Morganville Vampires by Rachel Caine is my absolute favorite paranormal series about vampires. Daylighters is the final book and I am anxious to see what will happen with Clair, Shane, Eve, Myrnin and my Michael Glass.

I have to be honest and admit that previous book wasn't good as the rest of the series. I think that it would probably be better it ended earlier - I think it should have 12 books. I have no idea what to expect.

I've been finding excuses to leave Requiem for later since March. I just don't want this series to end. It's bad enough that I had to say goodbye to The Infernal Devices.

I loved previous two novels, especially Pandemonium. I've heard a lot of complaints about how Lauren Oliver ended her trilogy - few of my students were really loud in expressing their disappointment and I had to shush them down before they told me all the good parts.

Starcrossed series by Josephine Angelini was a nice surprise - I didn't expect that I would like it that much. To be completely honest, only reason I picked it up was because I got ARC of second book, Dreamless.

Helen was kick ass heroine in sequel, I loved her to pieces and I am just afraid that final book will end up with some big cliche. Did I mention love triangle? I hate them...

If I Should Die

I was so excited first time I saw Revenants trilogy by Amy Plum - I love cover of Die for Me and I remember that I couln't wait to get my hands on it. And then I did. And I hated it. I told myself that I would give up on the rest of the books, but I didn't, I couldn't resist it - I liked Until I Die.

Why am I hesitant to read If I Should Die? What if it's bad as first one? I am still not sure if I'll ever read it.

I (Tanja) actually don't have much to add to this Glass' list. Beside Allegiant that she mentioned above there are only two others that I'm scared of reading.

First one is Origin. Honestly I loved this series and it was so good at the time, but lately JLA tends to disappoint me with her both paranormal and especially contemporary books. I'm afraid that some things I didn't mind before would bother me now.

Origin is something that can disappoint me a lot but it cannot crash my world like this one can. Sentinel is highly expected book for me. This might not be the most original paranormal story but still it's deep in my heart. It's not a secret that Aiden is my first book boyfriend and this book being disappointment is basically unacceptable for me.

I still have high hopes that I'll enjoy this one as much as the previous ones.


That would be it. The horrible list that keeps us awake at night. Do you have sequels on your bookshelves that you are afraid to read?