The Taker by Alma Katsu 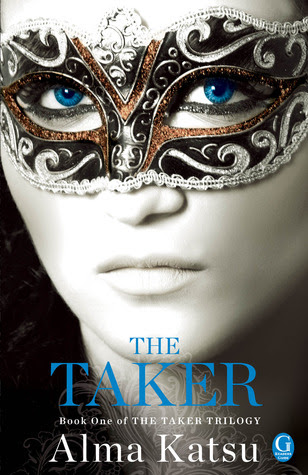 
True love can last an eternity . . . but immortality comes at a price. On the midnight shift at a hospital in rural St. Andrew, Maine, Dr. Luke Findley is expecting a quiet evening. Until a mysterious woman arrives in his ER, escorted by police—Lanore McIlvrae is a murder suspect—and Luke is inexplicably drawn to her. As Lanny tells him her story, an impassioned account of love and betrayal that transcends time and mortality, she changes his life forever. . . . At the turn of the nineteenth century, when St. Andrew was a Puritan settlement, Lanny was consumed as a child by her love for the son of the town’s founder, and she will do anything to be with him forever. But the price she pays is steep—an immortal bond that chains her to a terrible fate for eternity.

We all have these books that before they come out we must have and can't wait to read and of course we get the book once it's out and then it ends on our shelves for months and sometimes years. Well that happened with The Taker and maybe once upon a time I'd like it, now I have mixed feeling about it.

One think it sure though, this book has some originality which is somehow a surprise because immortality is not unknown thing to us. But the whole mystery wrapped around it here makes is more appealing. Everything starts when one day in Luke's hospital arrives a supposed murderer. It makes a huge surprise as St. Andrew is a small city and this makes it big news. Luke goes to ER and there he meets Lanore and she decides to tell him his story. The story takes them back in time where everything started. We go back at the turn of the nineteenth century in the same St. Andrew in the time of it's founders. It tells us story about great mystery and love that lasted for many decades.

Besides uniqueness that I like here the other interesting thing is it's connecting with past and the way the story is narrated. I really liked the picture of 19th century St. Andrew and the story about Lanore and Jonathan. Also the difference between the small rural town and later Boston where other things happened. What I have problems with - for starters the supposed love interest between Luke and Lanore, I have no idea when it started and how both of them felt. It was unnecessary moment for me. Mostly I had problems with all relationships here, except for Lanore and Jonathan's - that one was emotional. When the story goes to Boston and we meet supposed mysterious man who could be a man of our dreams, well he isn't. I did see the whole dom thing going on but for me he was a brute, a man without feelings who was cruel just because he could be. Not my type.

All in all this book doesn't offer explanations about the paranormal part and I might continue with the series if I even got some hints that the things will be explained, but this way I will let it go.