ARC review: How to Love by Katie Cotugno 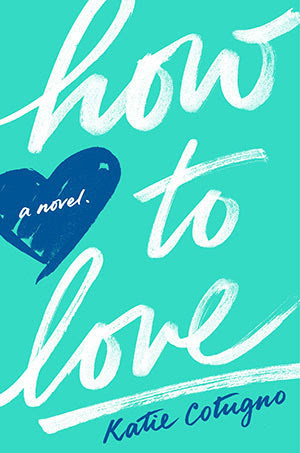 
Before: Reena Montero has loved Sawyer LeGrande for as long as she can remember: as natural as breathing, as endless as time. But he’s never seemed to notice that Reena even exists…until one day, impossibly, he does. Reena and Sawyer fall in messy, complicated love. But then Sawyer disappears from their humid Florida town without a word, leaving a devastated—and pregnant—Reena behind.
After: Almost three years have passed, and there’s a new love in Reena’s life: her daughter, Hannah. Reena’s gotten used to being without Sawyer, and she’s finally getting the hang of this strange, unexpected life. But just as swiftly and suddenly as he disappeared, Sawyer turns up again. Reena doesn’t want anything to do with him, though she’d be lying if she said Sawyer’s being back wasn’t stirring something in her. After everything that’s happened, can Reena really let herself love Sawyer LeGrande again?

It rarely happens that I can divide things in a book that I liked and didn't like, but I can do that here. So I'll make this easy for you to understand.

I'll start with the way the story is written. The whole division into past and present is something I really liked. Especially when in some part of the story some character or even from the past is mentioned and then that event is described in the other section.
Secondary characters were really done well here too, my favorite is Shelby, because she seemed real and I could always say what she was feeling.
Also it is a story that deals with some really common problems nowadays and while it shows good and bad sides it shows a real picture too.

The general problem with me is that I tend to get annoyed by books dealing with teen pregnancy. For only one reason - it's always an accident, but in reality it never is. Well, my love, if you knew how to have sex then for sure you must know the consequences of it. I know I sound heartless, but it frustrates me a lot. Let's get real, this is 21st century, the age of STD and we all had educational classes, not to mention that protection is easily available. Therefore I hardly can sympathize with Reena. She is actually main problem for me here. I had no idea what she was feeling and in general what she wanted out of her life. It annoyed me a lot. The lack of some details can also be added as the thing I didn't like here.
Another thing that I must add is that ending. Yes the time has passed but forgiveness is not earned easily.