Made of Stars by Kelly York 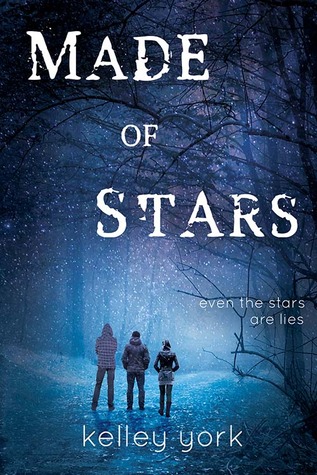 
When eighteen-year-old Hunter Jackson and his half sister, Ashlin, return to their dad’s for the first winter in years, they expect everything to be just like the warmer months they’d spent there as kids. And it is—at first. But Chance, the charismatic and adventurous boy who made their summers epic, is harboring deep secrets. Secrets that are quickly spiraling into something else entirely.
The reason they've never met Chance’s parents or seen his home is becoming clearer. And what the siblings used to think of as Chance's quirks—the outrageous stories, his clinginess, his dangerous impulsiveness—are now warning signs that something is seriously off.
Then Chance's mom turns up with a bullet to the head, and all eyes shift to Chance and his dad. Hunter and Ashlin know Chance is innocent...they just have to prove it. But how can they protect the boy they both love when they can’t trust a word Chance says?

If I needed to describe this book using only few words it'd be full of surprises. Mostly because I had no idea what's this book about, but I have heard great things about Kelly York's writing so I wanted to get a full experience. I did accomplish that.

For one reason or another I though that this was actually a paranormal read when I get to read the book I understood that this was actually a contemporary story in it's finest. It's not a typical boy meets girl story where everything is great, it's more than that. Hunter and Ashlin are back to their dad's and they cannot wait to meet a boy who was a big part of their childhood. Chance was a boy with whom they had great adventures as kids. Only growing up they realized that many things about Chance were mystery. They didn't know his parents nor where he lives.

This story can basically be divided into two parts. The start when you get to meet the characters and try to connect all the details about Chance and after the accident when Chance's mother is dead and everything gets much darker. It was a huge change from one world to another and at moments I felt like some things later are happening too fast. I felt that there was more to the ending. I wish there was more.

Besides that all other elements of this story were really good. You could feel Hunter's doubts and his insecurity, while at the same time you admired Ashlin for being strong and probably the best sister Hunter could wish for. Chance was a bit unusual at the start but later when you get to meet his life your heart starts to ache for him.

I'm really glad that one important part of this story isn't revealed in the blurb. It really took me by surprise and made me understand this story better. It's a story about discovering yourself and finding your true self.

***NOTE: Copy of this book is kindly provided by the publisher Entangled Teen. Thank you!
I'm not paid for writing this review. I do it was a lover of written word. All opinions are personal!
Objavio/la Tanja - Tanychy u 00:30