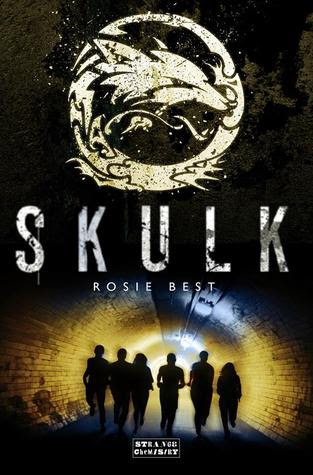 
When Meg witnesses the dying moments of a shapeshifting fox and is given a beautiful and powerful stone, her life changes forever. She is plunged into the dark world of the Skulk, a group of shapeshifting foxes.
As she learns about the other groups of shapeshifters that lurk around London – the Rabble, the Horde, the Cluster and the Conspiracy – she becomes aware of a deadly threat against all the shapeshifters. They must put aside all their enmity and hostility and fight together to defeat it.

Now I'm thinking and realizing that we don't have enough shapeshifting books out there, or it's just me not finding them. I have no idea. But when I first saw that this was a book about shapeshifting I needed to read it. Luckily I have got a chance to do so.

One night after out main character Meg sneaks out to paint graffiti something unusual happens. She sees  a fox, dying fox but in the next moment that fox turns into man. Even though scared she cannot but be surprised and when she is given a beautiful stone she had no idea that power is now transferred to her. Soon enough she discovers her new power and luckily manages to meet a group of shapeshifting foxes or Skulk as they're called. But she also discovers that it's not only foxes that people shapeshift into but that they're other clans that shapeshift into other animals. Actually there is five of them and the relations between them aren't the best to say so, but after the danger is upon to all of them they must unite and fight together.

Like I said the whole shapeshifting part of this story made it really different. I liked how the author created the whole idea and the way she used different animals. Some of them you might never expect to be presented. Only thing that bothered me a bit was the start. I struggled to connect with Meg at first (I was a bit turned off when I saw that she was 16) but later as the whole story developed I got meet her better and see her grow.

This book was really original and nicely paced with interesting characters. Also the readers who need a bit of romance in their stories, scare not. You'll get to enjoy the glimpse of it as well. But the focus is on the idea itself.

***NOTE: A copy of this book was kindly provided by the publisher Strange Chemistry. Thank you!
I'm not paid for writing this review - I do it as a lover for written word. All opinions are personal.
Objavio/la Tanja - Tanychy u 00:30