Blog Tour : Review & Giveaway - None of the Regular Rules by Erin Downing 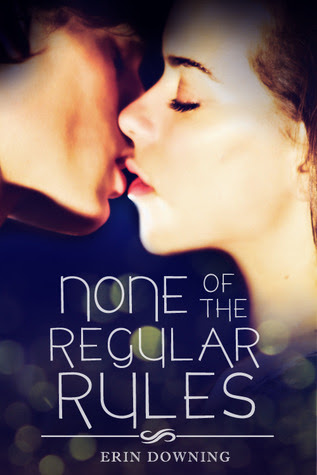 The weekend before the start of senior year, Sophie Erickson and her best friends, Ella and Grace, discover a handwritten list of dares tucked away in the glove compartment of Sophie’s beat-up old Toyota. But this isn’t just any list; it’s a dead girl's bucket list.

Sophie's beloved aunt Suzy died as a teenager in a fatal fall, leaving Sophie with an overly cautious family, a few fading photographs, and a bucket of bolts that barely passes for a car. But now, Sophie has Suzy’s list of the things she wanted to do in her last year of high school. Sophie can't help but wonder: What would happen if she tried to fulfill Suzy’s last wishes, to live out the longed-for life of her aunt, her hero?

As Sophie and her friends attempt to knock off the things on Suzy's list of dares, love blossoms in unexpected places and Sophie begins to feel that her life is finally coming together...when in fact, everything is slowly unraveling around her. When the truth about a long-held family secret threatens to shatter everything she believed to be true, Sophie is forced to question everything she knew about the life and people she believed in, and ultimately herself.

This is one of these books that I thought I can't make mistake with. Well that's partly true, cause when I say I - I mean the person I used to be..it's looks like that. But I should tell you more about the story first.

Sophie is a really typical young girl. She is in high school now and most of her days she is spending with her two best friends. Her neighbor next door is a bit older. He is leaving for college this summer and that's why he's hosting parties in his yard all night long. Of course Sophie is invited but too scared to go. Until one day when by the accident she finds a list. It's a list her aunt left in the car which Sophie inherited. Her aunt was her hero and now she is gone - dead. Sophie feels like she needs to knock off the things on the list in memory of her aunt. She doesn't even dream that by doing so she will change herself too. She grows up with the list but unfortunately not always things go according to the plan.

Now back to the start. Like I said few years back this book would be something wonderful to me. It's a realistic story about teens growing up, getting to know the world, love and find themselves. Well today I guess I'm older and I don't feel the same. So I believe that the younger readers will love this book but I think it's time for me to leave them behind.


Erin Downing has written more than a dozen books for young adults, tweens, and kids. Her guilty pleasures include an unhealthy obsession with reality TV and cheesy romantic dramas (Revenge! Alias!), an addiction to Us Weekly magazine, and cupcakes.

Before turning to writing full time, Erin worked as a book editor, spent a few months as a cookie inventor, and also worked for Nickelodeon. Erin has lived in England, Sweden, and New York City, and now resides in Minneapolis, Minnesota, with her husband and kids. More information about Erin and her books can be found at her website.