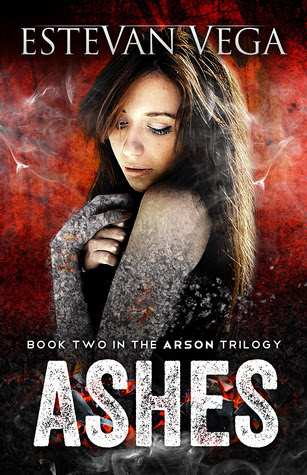 Buy the book at
Amazon / Barnes & Nobles / The Book Depository

MORE THAN THREE MONTHS HAVE PASSED SINCE ARSON AND EMERY WERE SUDDENLY TAKEN. TAKEN AND THEN SEPARATED. AND EXPERIMENTED ON.

The minds running Salvation Asylum have abducted them for a dark purpose. A campaign has been set in motion to genetically alter mankind. Unknowingly, Arson has become the most vital instrument in this global scheme, initiated by a select group of brilliant scientists and cunning world leaders. Confused, trapped, and unable to fully manifest his abilities, Arson faces a new existence crawling with questions. Will he ever see Emery again? Is Grandma still alive? Can the fate of the human race really hang in the balance of one choice?


Nightmare and reality collide in Ashes, book two in the gripping ARSON trilogy. Love will be tested. Powers will shift. And the past will invade the here and now as Arson discovers a part of himself he has never before known and fights against his own shocking origins. Will this boy who once tempted fire be able to take on a fearful future? When the struggle intensifies and secrets come to light, will Arson be ready to accept the haunting revelation that there may be others out there, others like him?

Few moths back I discover this series (well technical it discovered me...but hey - details) and I really liked the first book in the series - Arson. As you could see in my review unusual was a word for it. By now I discovered that Estevan has its own way of telling you the story and all you have to do is get used to it. It looks like I did.

It'll be hard to tell you much about the story in the sequel without spoiling the first book but I'll try. In case you don't know our main character - Arson well he has been through a lot and during that journey Emery was a good company. Now after everything the things have changed. Three months later they're taken. We're now in different environment with different problems. It was hard to catch all the links at the starts but once you do the story flows easily. In the Ashes we get to know new characters who change the dynamics of the story. I really like that, even though as in Arson this book skips form one story to another until they cross their paths. Still this book was - how to say it? - disturbing. I have no idea how to explain this but I had some strange feeling while reading this. Maybe darker would be a good word. Some people will probably like it but as always I'm too much of a coward and I don't really enjoy it so much. But what's still there is a need to find out more or what happens next.

If you have read Arson I believe you'll love the sequel. In case you haven't then I believe you should. Maybe at first you won't be satisfied but you'll get used to the storytelling and Estevan's writing style. Now I have to wait for the third and I believe last part of this series.

It's a bit late but in case you wanna win something here is your chance! ;)