Sinner (The Wolves of Mercy Falls, #3.5) by Maggie Stiefvater 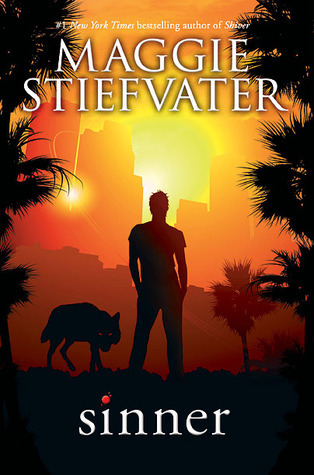 "Sinner follows Cole St. Clair, a pivotal character from the #1 New York Times bestselling Shiver Trilogy. Everybody thinks they know Cole's story. Stardom. Addiction. Downfall. Disappearance. But only a few people know Cole's darkest secret -- his ability to shift into a wolf. One of these people is Isabel. At one point, they may have even loved each other. But that feels like a lifetime ago. Now Cole is back. Back in the spotlight. Back in the danger zone. Back in Isabel's life. Can this sinner be saved?"

Tanja: You of all people know how much I love Maggie's writing and how I drive people crazy with it. So I can't help but wonder where did it go. I couldn't find it here, which makes me rather sad.
Glass: I was always raving about how amazing this woman writes, but I have to agree with you and say that I am rather disappointed with Cole's story. I expected epic conclusion, but left hanging dry. What happened?
Tanja: I have no idea where all the magic disappeared. But to organize our thoughts better I propose we list pros and cons here. So would you like to start?
Glass: Perfect! Let's see...


Glass: I was so happy with how Maggie Stiefvater managed to avoid all stereotypes of genre and gave us a story which is this amazing crossover between young adult and new adult. I didn't expect anything else from a woman who wrote Scorpio Races.
Tanja: I totally agree with that. I also liked how Maggie kept this story apart from The Wolves of Mercy Falls. Sinner is set in LA which put both characters away from everything that happened before. You can read this story on its own, but at the same time I suggest you read the first series.
Glass: That is true, most of the companion novels are about same events but usually told from a point of view of a supporting character. Speaking about characters, that is one more plus - both Cole and Isabel are different than in previous novels. At moments I even wondered if I had missed something important between Forever and Sinner.
Tanja: I felt the same. My favorite thing or better said moment in this story was when Cole came to pick Isabel up after that party. I could feel bits of old Cole and Isabel then. But even though they did behave like before it was brought to the limit where I didn't enjoy it.


Tanja: Like I said at the start there is the writing which was nothing like that poetic sort we had in the previous books. I missed it and my heard ached for it. But still my biggest problem was to determine the point of this story. I didn't see it then and I still cannot see it now.
Glass: Also, it had this really weird atmosphere - like a mix of Reckless by S.C. Stephens and Great Gatsby by Scott Fitzgerald. One second I love how she pulls me into Cole's head, it's like I am right there with him and everything he feels, I feel. But then comes this big eye-roll moment and it's like I'm reading completely different book.
Tanja: Yes, both characters were taken to their extreme and we could see that their relationship was too destructive. It wasn't balanced and that's why the ending itself felt a bit off for me. Everything happened so fast that at moment I though that was it, the next chapter things turned out of sudden. Drama, and hot and cold moments were too much and I didn't like it.
Glass: Well, I've read about more destructive relationships and you know that melodrama is my guilty pleasure, so I didn't have much issues with that. What did bother me is something I usually say for John Green's novels - pretentious writing and characters that try too hard to sound "witty" and "cool". And I can't believe that I am describing that way something Maggie Stiefvater wrote.


We are not sorry for reading this book because it was wonderful to get back to our favorite series, but other than being enjoyable and quick read, Sinner was not what we expected. Fans of The Wolves of Mercy Falls might read it "just because", but in the end, we doubt that it will be a memorable read.