Arms of Anu by Christina Mercer 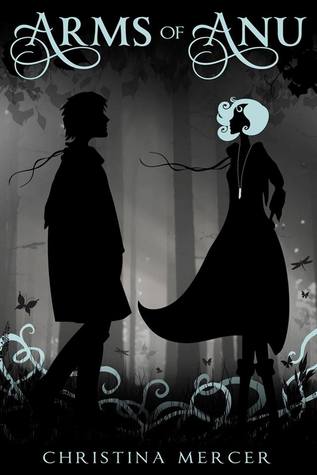 
Blood of body, blood of soul, Entwined for life, then unfolds; If blood still runs when magic binds, Soul is never too far to find.
In ARMS OF ANU, Lia and Kelven battle through a land of tyrants, war and magic.
Can Lia escape the foes who ensnare her? Will Kelven's love withstand the darkness taking root inside Lia? Is freedom too high a crown to reach, or will they forever remain in the hollows?

Beside the covers which you really cannot take your eyes off, Both Arrow of the Mist which I reviewed last year and Arms of Anu are much more than that. Despite them being more for middle grade readers, its magic, innocent romance and never-ending fight between good and evil is so universal.

After Lia makes her sacrifice and goes to fight the great darkness and fog of Brume the result is far from being clear. It's the darkness that's always looming near and now the fight in the kingdom is making the whole situation much harder. Once again it's time to summon magic and fight against the evil forces. But maybe the magic within Lia is not the only source she can relay on as there is that one force that many seem to consider the strongest of them all.

As the prequel in this series, Arms of Anu is another fantasy that makes the child within me fulfilled. It's all I loved as a child, a strong heroine whose braveness is to be admired, to the powers and settings of dark woods to the magical castles, constant fights and intrigues which give additional layer to this story. What's addition to all that is Kelven's POV, which makes me dream of a knight like he is, always supporting, strong and carrying. I wouldn't mind him taking me to ends of darkness of Brume and being by my side to fight it.

Only I was hoping to see the whole picture of this world this time. I did enjoy bits and pieces of it but it lacked the full picture. But I rise my hopes up to see it in the next sequel (needless to say I refuse to believe that there is no more).

***NOTE: Copy of this book was kindly provided by publisher, Patchwork Press, via NetGalley. Thank you!
Objavio/la Tanja - Tanychy u 00:00