The Trouble with Fate by Leigh Evans 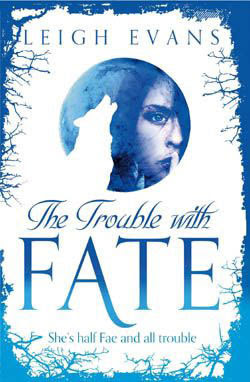 
WHAT SHE DOESN'T KNOW MIGHT KILL HER: Hedi looks normal. Yet that's taken effort. Her fellow Starbucks baristas don't see her pointed ears, fae amulet or her dark past, and normal is hard for a half-fae, half-werewolf on the run. Hedi's life changed ten years ago, when her parents were murdered by unknown assassins. She's been in hiding with her loopy aunt Lou since, as whatever they wanted she's determined they won't get it. Things change when wolves capture Lou, forcing Hedi to steal to free her -- for if she can offer up a fae amulet like her own they may trade. But it belongs to a rogue werewolf named Robson Trowbridge, who betrayed Hedi on the night of her greatest need. Over forty-eight hours, Hedi will face the weres of Creemore, discover the extent of her fae powers and possibly break her own heart in the process.

I should start with the fact that I wasn't such a big fan of Urban Fantasy. I had some really bad experiences with one series and decided to put that genre aside. Boy I really missed a lot. So don't be surprised as you'll be seeing plenty of UF reviews here. I've discovered a fan withing myself.

The Trouble With Fate was that book that started awakening that side of me. Some other books opened my eyes completely but this one started all that. When I've gotten this book from the published I expected it to be more paranormal. Even though the differences between the two are still a bit unfamiliar with me. So this is as the text below the title says about a girl that's half fae and  all the trouble. That's true. Hedi our main character in this book is all that. She has a really tough past which she carries around. She tries to fight it but let's be real you can't get away from it. She still has her fae amulet if nothing else to reminds her of what she is. She's been hiding all this time but suddenly things started to change. She sees someone from her past and their paths will cross again. She must stop fighting a big part of her. Not the fae one but the other one.

This book turned out to be something really got. The beginning of the book got me confused and it took me some time to get through the start and get used to the writing and the story. But to say that I enjoyed the second part of the story would be an understatement. Suddenly I was so caught in the story and it was over. For now at least. I'm dying to read the sequel and to get more of this.

*** NOTE: Copy of this book was kindly provided by the published Pan Macmillan. Thank you.
I'm not paid to write this review - I do it as a lover of written word. All opinions in this review are personal.
Objavio/la Tanja - Tanychy u 09:26