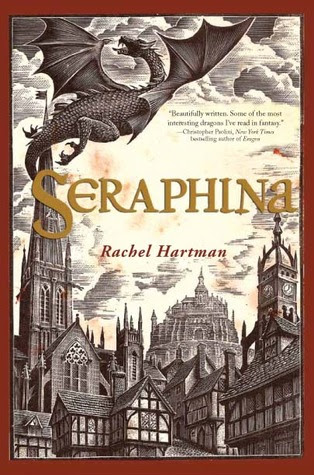 Four decades of peace have done little to ease the mistrust between humans and dragons in the kingdom of Goredd. Folding themselves into human shape, dragons attend court as ambassadors, and lend their rational, mathematical minds to universities as scholars and teachers. As the treaty's anniversary draws near, however, tensions are high.

Seraphina Dombegh has reason to fear both sides. An unusually gifted musician, she joins the court just as a member of the royal family is murdered—in suspiciously draconian fashion. Seraphina is drawn into the investigation, partnering with the captain of the Queen's Guard, the dangerously perceptive Prince Lucian Kiggs. While they begin to uncover hints of a sinister plot to destroy the peace, Seraphina struggles to protect her own secret, the secret behind her musical gift, one so terrible that its discovery could mean her very life.

Winter is coming (brace yourselves) and for me that means a lot paranormal and fantasy and books with "hard" thematic. This is my unwritten rule but I tend to like these genres more in winter while in summer I can enjoy in sweet little and romantic books. But now back to the story.

Seraphina is nothing new in our bookish world cause many of readers have read it and enjoy it. I finally got some time to read it myself. First thing you notice it's a book about dragons and I believe they are maybe the most interesting creatures to read about. At least for me. Here we're entering the new world where people and dragons live in the same world but still in different parts of it. The it interact and live in peace but it's not the land of milk and honey. There are huge differences between them and one species can't understand the other and vice versa. Still they try to keep peace among them but recent events aren't helping them. In the middle of all that is Seraphina who has enough reasons to be on the both sides.

I really liked the fantasy part here. I liked Seraphina as character and I won't even start about Lucian. If only I knew how to draw so I couldn't show you his picture in my head. Ah but then you'd steal him form me so this way he is on safe. I'm kidding of course, but I really enjoyed every moment in the book that had something to do with Lucian. The plot was also interesting, but the thing I didn't like was that sometimes the story went too far and it became too long and it was hard to follow. But the parts whit action were really enjoyable. All in all I'll be waiting for the next book in the series and I expect a lot.