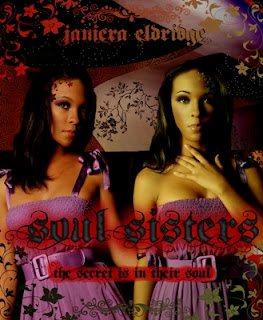 Soul Sisters is an urban fantasy novel about African-American twin sisters Ani and Dana who have a rather unique secret: one sister is human while the other is a vampire. While the sisters have lived peacefully with each other for many years one fateful night will change both their lives forever. When a drunken man tries to attack Dana (the human sister) Ani (the vampire sister) protects her sister with all of her ferocious power.

However, when the vampire's leader Donovan finds out about the public display he calls for the sisters to be assassinated for disobedience. Ani and Dana now are in for the fight of their lives to protect each other as well as the lives of their dedicated friends who have joined them on their mission for survival. If Dana and Ani can make it through this time of uncertainty, Ani can take her new place as vampire queen. Soul Sisters is expected to be a trilogy; The book also features a multicultural cast of characters that brings a new edge of chic to the vampire world.

Keeping the Flow with Your Characters and Plots

Readers and authors often discuss what makes a good book. Is it strong character, a strong plot, or simply the way a story is told? Technically the answer is all three. Besides strong characters I personally believe the most important part of writing a book is making sure it is constant. A book has to be consistent in its plot and its character development to fully seduce the reader into one’s story.
Building a consistent character is actually not that hard. When someone sets out to create a new character they need to map out certain personality attributes of that character. Is he/she moody or happy? Is he/she egotistical or willing to give all? It’s important to have a clear-cut view of what your character’s mind set is like. When that character comes to a real cross-road in the book the author has to ask themselves a very simple question: with he/she’s personality how they would handle this situation? Nothing urks a reader more than a character making a choice that does not fit their personality at all just to get the plotline moving in the direction they want it to move. Even if you think the characters choice will disappoint the reader, they will be more satisfied with the constancy of the situation then just a turn of events that comes out of left field.
Consistency in the plot line is extremely important to. It is nice to have twists and turns in a story but readers build so much of their passion for a book around the consistency of the story. When an author practices world building they have to make sure their description of the world stays the same. That could include everything from the setting, rules and background characters within the story. The reader should never have to ask why something happened; the events should just seem natural to them. A little surprise is not a bad thing though.

What are some things you like consistent in the novels you pick up?