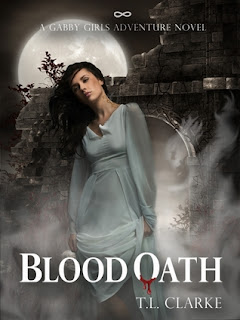 
Before I discovered that I was born into a secret society called the Eternals, blood-oath Warriors sworn to track and slay the dark and evil creatures that walk the shadows of the earth, the only major thing that I, I mean we--that's me, Jessica, Rosalinda, and Zora--cared about was starting our freshman year at Vineswell Academy, the prestigious boarding school for girls.

But that was way before the blinders were cruelly ripped from our eyes and cold reality slapped us on the back of our heads with a chain of not-so-nice realities, like the fact that everything we knew about our mothers was all lies, essentially smoke and mirrors designed to hide their very secretive lives as Circles, women Warriors inside the very deadly world of the Eternal Warriors.

Excerpt
“Your wicked magic will not work on me, Eternal. The choice is simple. Break the curse.” His voice was smooth like honey, coaxing and very mesmerizing.

I laughed bitterly. “Using the enthrall spell will not ease the pain of my final decision.” Part of me was quaking in my shoes, but the other part was
irrationally calm. The conflicting emotions were tearing me apart. I looked at him with more calm than I was actually feeling as I continued, “I cannot give you what you want. The curse remains until sacrifices are made.”

What in the world was I saying? I was practically sealing my death by telling him no. The Gabrielle side of my brain was screaming to just tell him what he wanted to hear to save my life, but the soul that was currently possessing me was saying quite the opposite.

Tears slipped down my cheeks. “What shall your sacrifice be?”

“You,” he responded in a voice laced with pure venom.

I watched unflinchingly as his swords roared with flames, slicing smoothly into my body. Fire encircled me; wicked flames licked my skin without mercy, burning me from the outside in. I gasped with pain, banging against the shell of my body with all my might, but I was unwillingly trapped inside of the fiery tomb of pain. I silently begged
for escape as the heat smothered me, until the rational part of my brain screamed furiously that this was just a dream; just wake up, and it would be over. Or would it?

I heard my name being called, but it was distorted and warped, like it was being called through a wind tunnel.

I write Preteen/Teen Fiction. I also write Adult Fiction (Paranormal Romance) as my alter-ego Sedona Venez. I'm a  lifelong reader with a fascination with mythology and anything paranormal. When I'm not writing, I can be found watching bad movies, listening to music, and traveling.

Open only to those who can legally enter, receive and use an Amazon.com Gift Code or Paypal Cash. Winning Entry will be verified prior to prize being awarded. No purchase necessary. You must be 18 or older to enter or have your parent enter for you. The winner will be chosen by rafflecopter and announced here as well as emailed and will have 48 hours to respond or a new winner will be chosen. This giveaway is in no way associated with Facebook, Twitter, Rafflecopter or any other entity unless otherwise specified. The number of eligible entries received determines the odds of winning. Giveaway was organized by Kathy from I Am A Reader, Not A Writer http://iamareadernotawriter.blogspot.com and sponsored by the author. VOID WHERE PROHIBITED BY LAW.