(ARC Review) The Shape of My Heart by Ann Aguirre 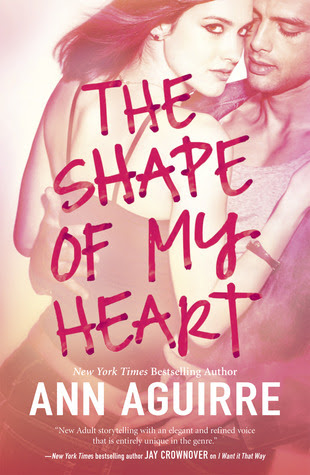 "Some people wait decades to meet their soul mate. Courtney Kaufman suspects she met hers in high school only to lose him at seventeen. Since then, Courtney's social life has been a series of meaningless encounters, though she's made a few close friends along the way. Especially her roommate Max Cooper, who oozes damaged bad-boy vibes from every pore.

Max knows about feeling lost and trying to move beyond the pain he's been on his own since he was sixteen. Now it's time to find out if he can ever go home again, and Courtney's the only one he trusts to go with him. But the trip to Providence could change everything because the more time he spends with Courtney, the harder it is to reconcile what he wants and what he thinks he deserves.

It started out so simple. One misfit helping another. Now Max will do anything to show Courtney that for every heart that's ever been broken, there's another that can make it complete."

Third and final book new adult series, 2B Trilogy by Ann Aguirre, was a pleasant enough read and I believe that fans of this kind of books will be satisfied with story about Max and Courtney. One thing I have to admit is that I expected much more from this story.

Max. I was looking forward to reading his  story because he was such a strange guy in previous two books. Mix of two completely opposed images - he is emotional and vulnerable young man, cuddly and sweet, but only in front of his roommates. For everyone else, he turns into player and womanizer, friendly guy who seems to get along with everyone. I knew that there would be a darker story about his past compared with other characters and that was completely fine by me. Unfortunately, it took turn into overly melodramatic and not so dark after all. More like "Cinderella and evil stepmother" or similar black and white reasoning.

Courtney. Probably one of the most original female characters -  because of the fact that she is bisexual. I have never so far read new adult (or young adult) with bisexual character. So many wasted possibilities! Don't get me wrong, I did like her, but I felt as if that part of her portraying was thrown into the mix just to make her look more interesting. Whole part about Courtney liking girls and interacting with her ex was unbelievable. Story quickly turns into regular new adult boy/girl romance.

Final judgement? The Shape of My Heart is satisfying conclusion to the trilogy with few original ideas and even more typical new adult premises.

*Copy of the book was provided by publisher, Harlequin HQN, in exchange for an honest review. Thank you!*
Objavio/la Glass u 00:00