You Against Me by Jenny Downham 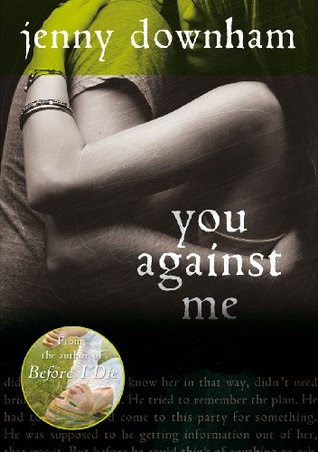 
If someone hurts your sister and you're any kind of man, you seek revenge, right?
If your brother's accused of a terrible crime but says he didn't do it, you defend him, don't you?
When Mikey's sister claims a boy assaulted her, his world begins to fall apart.
When Ellie's brother is charged with the offence, her world begins to unravel.
When Mikey and Ellie meet, two worlds collide.
This is a brave and unflinching novel from the bestselling author of Before I Die. It's a book about loyalty and the choices that come with it. But above all it's a book about love.

Jenny Downham is another author that I need to add to my list - authors-that-make-things-real as she really does that. In this story you get to read about the thing that have have happened before and unfortunately are likely to happen again.

Mikey is a boy that has a lot of things on his mind. He mostly takes care of his family, so he has to keep things in order when his mother is too drunk to do just that. It's not an easy thing but a teenage boy who works to bring food to his home and at the same time tries to live his own life. Things are bad as it is, but they got even worse when his sister claims that a boy assaulted her. He as big brother failed to take care of her and now he has to do anything to help her. It ain't easy when that boy is a coming from a very wealthy family and it's his word against theirs. Only person who can tell the truth boy's sister Ellie, who acts like any other sister will and defends her brother. Only those two worlds will meet again and that will change many things.

When it comes to the characters you will fall in love with Mikey instantly, as he is a boy that suffers a lot and simply you would want to give him a hug, because he is the brave one, the one who stayed with his family and took care even though he is not old enough for that. Ellie is a girl you would want to have as your friend. She is at times navie and in her innocence some can manipulate with her, but at the same time she is strong and once she let her emotions and stops acting like her family wants her to you'll cheer for her.

Like you can assume this is a story about coming of age and finding the true self, also not letting the revenge blind you and figuring that there are more beautiful things to care about. It's also a story about love, the one that grows and fills you as you turn the pages of the book. It's a story that you should read.