Blog Tour: When the World was Flat (and we were in love) by Ingrid Jonach 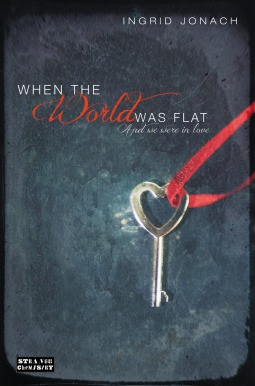 
Looking back, I wonder if I had an inkling that my life was about to go from ordinary to extraordinary.
When sixteen-year-old Lillie Hart meets the gorgeous and mysterious Tom Windsor-Smith for the first time, it’s like fireworks — for her, anyway. Tom looks as if he would be more interested in watching paint dry; as if he is bored by her and by her small Nebraskan town in general.
But as Lillie begins to break down the walls of his seemingly impenetrable exterior, she starts to suspect that he holds the answers to her reoccurring nightmares and to the impossible memories which keep bubbling to the surface of her mind — memories of the two of them, together and in love.
When she at last learns the truth about their connection, Lillie discovers that Tom has been hiding an earth-shattering secret; a secret that is bigger — and much more terrifying and beautiful — than the both of them. She also discovers that once you finally understand that the world is round, there is no way to make it flat again.
An epic and deeply original sci-fi romance, taking inspiration from Albert Einstein’s theories and the world-bending wonder of true love itself.

There are some things that I'm really afraid of while reading books. One of my fears is that I'll get a book with great idea and then the whole story will start to remind me of some mainstream stories - like Harry Potter or lately Twilight. I had the same fears when I started this one, but luckily they disappeared soon.

Here is why. We start with high school here and of course there is a girl Lillie who is just average teen girl, she is not popular or anything so when she gets into staring contest with the hottest new guy in high school it turned some alarms in my head, but only for short as later it turned out to be something I'd never dream of. Soon enough it turned out that Tom even though was mysterious he acted like that for a reason. When you go through everything he went through to find the way to be happy and tries to get what his hearts wants the most it's really easy to love him. Especially when the romance develops slowly and you get to know both characters better. So soon after I started reading this book I was so interested in it that I read it nearly in one sitting.

All in all this was the very unique idea, at least for me, and it worked out properly, or better said the author made it work. I liked the combination of a well know theory with sci-fi elements and of course going through love and world-bending wonder. I could see characters grow and with them their love which made it even sweeter.

What makes me really happy is that Ingrid told me in the interview that she thinks about writing a new book that will be only loosely connected with this story as for me Lillie and Tom's  story has got it's perfect ending, but at the same time I'd love to see more of this idea.

If you want to find more about this book don't forget to follow the rest of the tour where you can see different reviews, guest post, interviews and more.