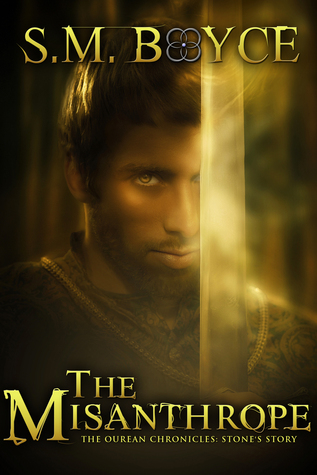 
Before Stone trained Kara Magari or taught the First Vagabond to master the Blood loyalty, he was nothing more than a slave boy named Terric.
Terric is a curious loner hellbent on reading his master’s forbidden books. When one heist goes wrong, Terric abandons his old life and runs for freedom—only to fall prey to a ruthless man named Niccoli.
Niccoli is an isen—a creature of magic from the hidden world of Ourea—and he awakens within Terric an unimaginable gift. But this gift comes with a catch. Suddenly in control of newfound power he is forbidden to freely use, Terric realizes too late he simply traded one master for another.
In Ourea, a world dominated by the gifted, few isen dare defy their masters. Until now.

In case you missed it somehow I'm a huge fan of The Grimoire Saga, which is actually from where the characters of this, and those to come, short story is coming from. So after the original saga ended, Boyce said that she would write the short stories for the three, for me the most interesting side characters. I was thrilled.

That's how we got to the Stone and his story. Now in this short story we see how everything started for him and what he actually was before we get to meet him as Kara's coach in a way. His story is quite interesting one as he started as someone not that important, but his desire to knowledge led him to the place he is when we first meet him. Not to spoil things for you, he goes through a lot in order to become somebody.

Now the thing with me and Stone is that we never had some special connection. Yes he was always an interesting character, but never really someone I couldn't wait to see in the book. So for me it wasn't really a surprise that I couldn't quite connect with him in this book. I did enjoy the story and really interesting world building, though.

But for everyone who has read or plan to read The Grimoire Saga, I recommend to read this story too. It's also a different view on Ourea (I won't say more).