ARC Review: What We Saw by Aaron Hartzler 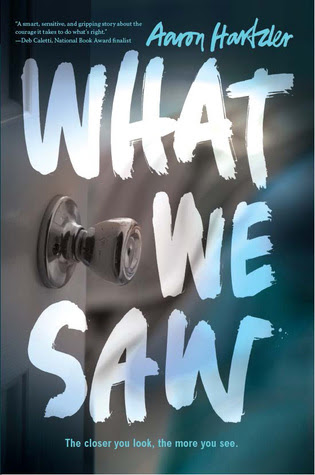 Kate Weston can piece together most of the bash at John Doone’s house: shots with Stacey Stallard, Ben Cody taking her keys and getting her home early—the feeling that maybe he’s becoming more than just the guy she’s known since they were kids.

But when a picture of Stacey passed out over Deacon Mills’s shoulder appears online the next morning, Kate suspects she doesn’t have all the details. When Stacey levels charges against four of Kate’s classmates, the whole town erupts into controversy. Facts that can’t be ignored begin to surface, and every answer Kate finds leads back to the same question: Where was Ben when a terrible crime was committed?

This story—inspired by real events—from debut novelist Aaron Hartzler takes an unflinching look at silence as a form of complicity. It’s a book about the high stakes of speaking up, and the razor thin line between guilt and innocence that so often gets blurred, one hundred and forty characters at a time.

Every once in a while I stumble upon a book that reminds me of something my favorite collage professor told us, back then first year literature students, about the art of reading. About it being interactive process. It is not just you holding this seemingly harmless object in your hands, following words on paper and converting them into the pictures in your head. Books can be dangerous things. Break the rules. Bring down oppressive societies.  Make people think with their own head and stop being part of the zombiefied mass. Tell the truth. And if you read just so you can escape reality and live in the la-la land of fairy tales (which are again construct of various ideologies), you are burying your head in the sand. Literature shouldn't only make you feel content and happy. Literature has to be brutal. Honest. Cruel. Make you feel angry and horrified.It has to push the lines. Protest and rage.

The rape culture and slut-shaming. Social media sites. These are basically topics of What We Saw. Based on real events. Real. As in this happened somewhere to somebody. What We Saw made me feel angry. I am still angry. It made me obsess over things we do not take seriously - like our children walking around with smartphones and not knowing basic rules of what is polite, safe and sending them into the big (virtual) world thinking that they are going to know to make difference between right and wrong, and pick right, hopefully, every time. That is where parenting stops. That is where murky world of modern society takes hold. And everyone hides behind the screen of the pone or computer, not realizing what "empathy" means. Turning real people into pixels, hashtags and number of likes and shares.

I have to be honest and admit that I wasn't completely won over by this book when I first started reading it. I was annoyed with main character, with how shallow and mindless she is sometimes. I am so happy that I read this now. What We Saw is the book we should make our kids read - no matter if you are a parent or a teacher. Make them read it. And talk about it. Talk, talk, talk. That is the only way to make a difference.

*ARC provided by publisher via Edelweiss in exchange for an honest review.*