Wherever You Go by Heather Davis 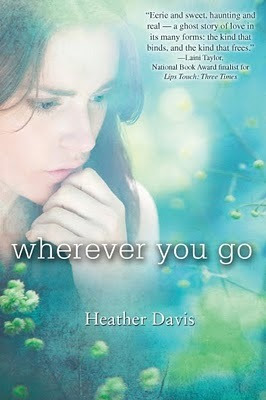 Seventeen-year-old Holly Mullen has felt lost and lonely ever since her boyfriend, Rob, died in a tragic accident. The fact that she has to spend most of her free time caring for her little sister and Alzheimer’s-stricken grandfather doesn’t help. But Holly has no idea that as she goes about her days, Rob’s ghost is watching over her. He isn’t happy when he sees his best friend, Jason, reach out to help Holly with her grandfather—but as a ghost, he can do nothing to stop it. Is his best friend really falling for his girlfriend?


As Holly wonders whether to open her heart to Jason, the past comes back to haunt her. Her grandfather claims to be communicating with the ghost of Rob. Could the messages he has for Holly be real? And if so, how can the loved ones Rob left behind help his tortured soul make it to the other side?
Told from the perspectives of Holly, Jason, and Rob,Wherever You Go is is a poignant story about making peace with the past, opening your heart to love, and finding the courage to move forward into the light.

Thanks to this 2013-TBR-pile-challenge I started reading the books that have been on my shelf forever. Of course I should have read this one a while ago but that's me after all.

Wherever You Go took me by surprise mostly because I haven't read the blurb (surprise, surprise) and it took me some time to catch everything, but once I did everything started flowing easily. Here we have a story about Holly, the girl who by the all circumstances grew up too early. Being only 17 she must take care about a lot of things - her sister, education and recently her grandpa. With all that she has recently lost her boyfriend, Rob. Her now dead boyfriend is still around, he is watching her. There is also Jason, Rob's best friend, who tries to help her as much as he can, cause he feels that she is special. He is the boy with different type of life and now he must pass all the challenges that are coming in order to help Holly. This is story about girl who has almost lost her life as a teenager, she has too much responsibilities on her mind. This is a story about letting go cause Rob must continue his way into unknown. And this is story about Jason, who is now starting to understand some things and has to sort his life out in order to be satisfied.

I really enjoyed reading about all of them. At moments this book was fanny but it also brought tears to my eyes. In my opinion beautifully written story about growing up and dealing with all sorts of troubles in life.