A Song For Julia by Charles Sheehan-Miles 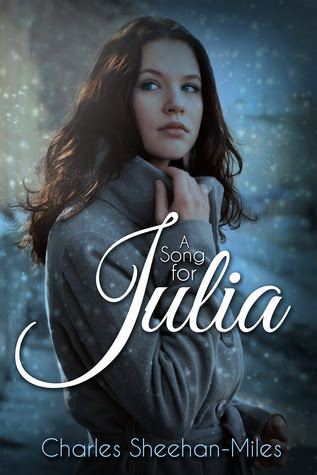 
Crank Wilson left his South Boston home at sixteen to start a punk band and burn out his rage at the world. Six years later, he’s still at odds with his father, a Boston cop, and doesn’t ever speak to his mother. The only relationship that really matters is with his younger brother, but watching out for Sean can be a full-time job. The one thing Crank wants in life is to be left the hell alone to write his music and drive his band to success.


Julia Thompson left a secret behind in Beijing that exploded into scandal in Washington, DC, threatening her father's career and dominating her family's life. Now, in her senior year at Harvard, she's haunted by a voice from her past and refuses to ever lose control of her emotions again, especially when it comes to a guy.


When Julia and Crank meet at an anti-war protest in Washington in the fall of 2002, the connection between them is so powerful it threatens to tear everything apart.

I know it took me a while to post this review but with my exams and everything I really didn't have time. I want to apologize to the author and AToMR blog tours who gave me the copy of this book. It won't happen again - I hope so.

So I haven't read the first published book in this series Just Remember to Breathe so I honestly didn't know what to expect. Glass told me that the books were really interesting and that I should give them a try and so I did. This is a story about Julia a not so typical girl because her father is a really important person in world so she must keep an image. It's not an easy thing to do when you're basically left alone in foreign country and when your family cares more about their status than you. Of course things didn't go as expected and that brought a lot of trauma into Julia's life. Now she is tired of being somebody that she is not and decides to take her life back into her hands. At the other side we have Crank a guy who also have a lot on his back but he has something to pull him thought - his music. Now they only need to learn how to be in control again.

The biggest thing that surprised me was the fact that this book is written by a man - no offense because I mean this as a compliment  It's just the female character is so strong and nicely written that it's really a big surprise for me. I enjoyed this story and I can't wait to read Just Remember to Breathe which I've already gotten from the AToMR. Thanks for trusting in  me.