{Blog Tour} The Enchanted (The Gateway Chronicles #4) by K. B. Hoyle

Ok, guys... Here we are again - book four of The Gateway Chronicles is out and we are (again) celebrating and cheering like crazy for its autor, amazing K.B. Hoyle. 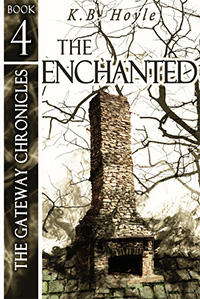 "Darcy Pennington’s course was plotted out for her long before she ever stepped foot in Alitheia. Finally willing to go along with her prophesied path, Darcy returns to the magical realm to find everything spiraling out of control. A painful rejection almost pushes her to breaking, and when she and her friends finally confront one of Tselloch’s gateways, nothing turns out as expected. Darcy wonders, in the end, if there is any hope at all for her, or for Alitheia."

Things are getting complicated in Alitheia. The Enchanted is much darker book than previous ones. Darcy and her friends are growing up. Stakes are higher this time.

All characters are more mature - I think it is already proven fact that K.B. Hoyle knows how to create believable fictional world. Maybe you won't find as much action as in first three books, but you'll get to learn about personal relationships, thoughts and... love. Yes, love. This book has that "hot and bothered" scenes and wouldn't you want to know about who... Well, read it and find out! I have to say one thing, though. They are sixteen years old, but compared with some other books about sixteen-year-olds, you don't have that feeling like they are trying to act as if they are twenty six.

I hope that author will tell us more about Sam and Lewis in the next book, but I'm especially curious about Dean and Amelia - they didn't get much space in The Enchanted.

And ending... Let's just say that it looks like the battle of epic proportions are waiting for us in the sequel. I can't wait! 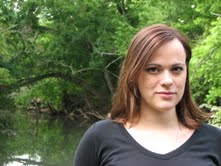 
K. B. Hoyle is a wife to a wonderful husband, a mother to two rambunctious little boys, an expectant mother to baby number three, and has been a classical educator for five years. She always knew from a young age that she wanted to write stories that would inspire people. Her favorite genre to read and write is Young Adult Fantasy and Science Fiction, so that is where her journey began. K. B. Hoyle began writing her first fantasy novel at the age of eleven, which proved to be valuable experience and practice for the novels she would publish as an adult.
K. B. Hoyle is currently writing the Young Adult Fantasy series The Gateway Chronicles, but she never stops brainstorming and planning for all the stories she hopes to write in the future.