The Shattered Dark by Sandy Williams 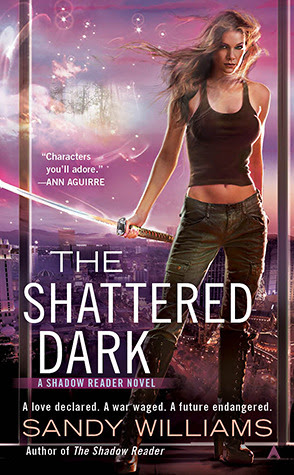 
McKenzie Lewis has a gift. It allows her access to a world few have seen, and even fewer can comprehend. It’s her secret. And it exists in the shadows…

McKenzie was a normal college student, save for one little twist: she’s a shadow reader, someone who can both see the fae and track their movements between our world and the Realm. It’s a gift for which she has been called insane, one for which she has risked family and friends—and one that has now plunged her into a brutal civil war between the fae.

With the reign of the king and his vicious general at an end, McKenzie hoped to live a more normal life while exploring her new relationship with Aren, the rebel fae who has captured her heart. But when her best friend, Paige, disappears McKenzie knows her wish is, for now, just a dream. McKenzie is the only one who can rescue her friend, but if she’s not careful, her decisions could cost the lives of everyone she’s tried so hard to save.

I can freely say that The Shadow Reader opened my eyes when it comes to Urban Fantasy and probably the best UF book I've read so far. Yes, there is a lot of UF books for me to read but that's how it is for now. Maybe because of that I expected too much, but this book was a great read, still not as good as the first one.

McKenzie, our shadow reader, is once again our narrator here. She picked a side in a previous book and maybe the road less traveled by but that's who she is - a fighter. It's not easy to discover that for years you have been kept in dark and now when she has her eyes open she know what to do. Once again she is about to try to balance her human life with the fae one. It might have worked if not for the rebel fae who kidnapped her friend and now things have changed again. She knows that she has to do a lot of thing on her own as things are really hectic in fae world but there is a lot of things she still doesn't know and a lot of people she should not trust.

This book still has a lot of elements that fascinated me: kick-ass characters, Aren, magical world, Aren, great world-building, Aren, plenty of action, Aren. You get the picture. Honestly Kyol is a great character but once in a while I fall for bad-boys too. The Shadow Reader was one of those books where love-triangle didn't bother, but that thing that happened at the end of this book is not really to my liking. I'm yet to see how the things will work-out in sequel, but I'm hoping for the best.

So even though this book had some issues, I still liked it in general and I can't wait to read the next book. I just hope that things won't get even more complicated.