The Shadow Reader by Sandy Williams 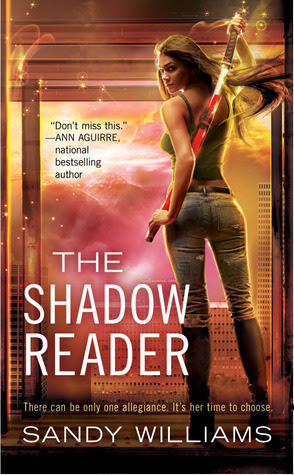 
There can only be one allegiance.
It’s her time to choose.

Some humans can see the fae. McKenzie Lewis can track them, reading the shadows they leave behind. But some shadows lead to danger. Others lead to lies.

A Houston college student trying to finish her degree, McKenzie has been working for the fae king for years, tracking vicious rebels who would claim the Realm. Her job isn’t her only secret. For just as long, she’s been in love with Kyol, the king’s sword-master—and relationships between humans and fae are forbidden.

But any hope for a normal life is shattered when she’s captured by Aren, the fierce and uncompromising rebel leader. He teaches her the forbidden fae language and tells her dark truths about the Court, all to persuade her to turn against the king. Time is running out, and as the fight starts to claim human lives, McKenzie has no choice but to decide once and for all whom to trust and where she ultimately stands in the face of a cataclysmic civil war.

I was avoiding Urban Fantasy for a long time. Let's just say I haven't had such a great experience with Georgina Kincaid series and considering that was Richelle Mead whose writing I love. Well it all made me thing that Urban Fantasy wasn't for me. I gave up too soon, unfortunately. This book was on my to read list for too long and this year I put it into my 2013-TBR-challenge. I just can say that I missed a lot. This book was beyond awesome for me. I probably put it on my to-read list because of some great reviews not realizing that it was UF.

McKenzie is an kick-ass girl that I've been waiting for too long. I've always been reading about some teenage kick-ass girls but this one was a college student. Total win! She is able to see the fae and because of that she has been working for the fae king for years. Now it was time to take a break and get her life back. She has lost her family and friends and she was determined to get a degree and her life under control. But the problem was that she was too precious for fae world and she couldn't run away from them. She could read a shadow that fae leaves behind and track them which would get them into danger. Even though Kyol has been more than a friend for her it was time to pull that all off as the relationships between fae and humans were forbidden. But there is that other side of the fae world where not everyone support the king. They get McKenzie and she meets the other side too.

Even though there was that love-triangle thing really because of everything else I could live with it. Aren is getting high on my book-boyfriends list. I'm dying to read a sequel and get a sight of that boy again. This is something that I'll try to continue asap. This fantasy world is really enjoyable and the writing is great.